Where I work, we have been using Microsoft Virtualization since Virtual Server was in Beta.  Of course, we don’t necessarily use all of the functions and features of all the software we have, but one feature that I have used a good bit is the “Convert physical server” action in System Center Virtual Machine Manager.  Until recently, I have used this with great success.  We run IBM xSeries servers and I have converted something like 50 of them to virtual machines running on Hyper-V over the past several years.

In late 2007, we bought our first IBM Blade Center (which I am very happy with) and with that move we also decided to do “boot from SAN” for all of our blades.  Just seemed to make sense that we wouldn’t put moving parts in a device that was designed to run so well without moving parts.

At the time, we were implementing a new ERP system and several “hanger on” type applications, and Hyper-V (virtualization in general) wasn’t something that was supported by a lot of the software we were deploying.  So we have a lot of powerful blade servers, running a lot of low use applications.  I have managed to eradicate several of those wasteful installations, but there are a set that I am only now getting buy-in to virtualize.

And today’s adventure begins with a Windows Server 2003 SP2 machine installed Boot from SAN on an IBM HS21-XM Blade server. 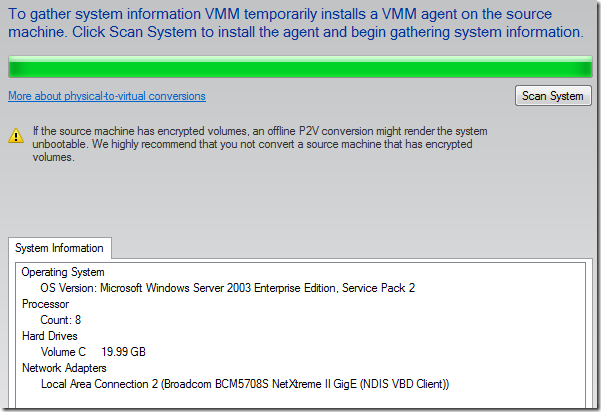 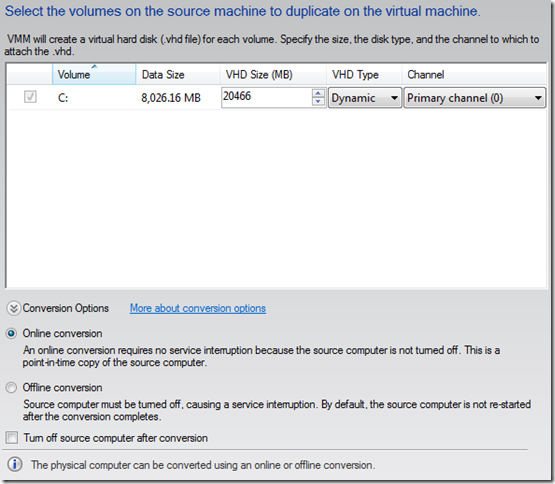 we can try the defaults..

5.  Specify the processor and memory…

7.  The job starts, the machine gets copied over, and …

That try resulted in a blue screen loop..

1. Proceed as above but select the Offline conversion option at step 4.

Recommended Action
Create a new folder under C:\Program Files\Microsoft System Center Virtual Machine Manager 2008 R2\Driver Import on the Virtual Machine Manager server and then copy the necessary 32-bit Windows Vista driver package files for this device to the new folder. The driver package files include the driver (.sys) and installation (.inf and .cat) files. Check the device manufacturer’s website for the necessary drivers.

We don’t really need to do that right…

Had some trouble with that part…  finally figured out that the drivers that need to be placed in that folder are the “RIS” drivers.

1. Proceed as try number 2, ignore warning because we did put the driver in there, and

Hmm… maybe this is just not meant to be.  Did some more searching and found this article: 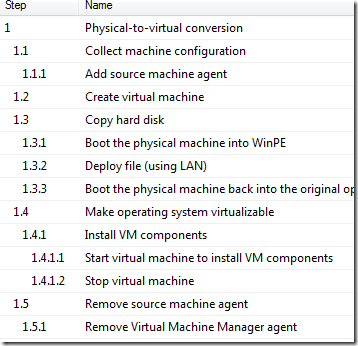 Ok so maybe it was getting that far and just “blowing up” after the install of the components.  Good thing about this being a P2V, I can go back to the source machine pretty easy and check the registry:

Looks like we may have an answer here.  Change the HKEY_LOCAL_MACHINE\SYSTEM\CurrentControlSet\Services\Wdf01000\Group entry to be WdfLoadGroup instead of base.

It is my guess, that this would have worked even with the online conversion option.