This is all simple.  Just drop the LUNs from the file server, give them to the cluster and assign them as pass through disk to the guest OS.  Simple…

Except, I kept getting the following errors when I try to do the import:

The operation failed, because an online pack object already exists.

The provider encountered an error while merging two packs.

I mean really…  what does all that mean.  I couldn’t find anything pertinent in my searches, I tried working in Diskpart, and got some of the same errors.

After lots of searches, I couldn’t find anything to help.  So I opened a ticket with Microsoft.  I got a very helpful person who told me that it basically sounds like a driver issue, but he couldn’t say for certain.  He couldn’t find much on it either.

So I checked the driver for the production file server: 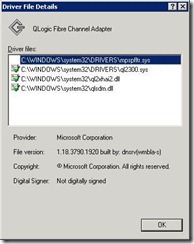 and compared that to the other 2003 server: 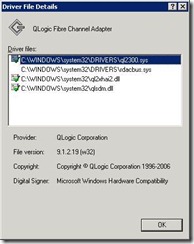 As you can tell, the culprit seems to be an outdated driver on the current file server.  Seems I don’t keep things as up to date as I should.